In September 2019, I ran the 156 mile Hebridean Way Footpath, taking a week to complete it. The path starts on Vatersay in the South and finishes at Stornoway in Lewis, visiting 10 islands of the Outer Hebrides. This requires two lovely ferry trips between islands, but also uses the six causeways which have been built, connecting the islands together.

The route includes some beautiful beaches, amazing loch, sea and mountain views and some very interesting archaeology and Gaelic culture. The terrain is not too hilly, but navigation and weather can be challenging, and conditions underfoot boggy (at best). The route is mostly off-road and there are long sections with no phone coverage or access to facilities like shops. I used the excellent Cicerone Press guidebook, by Richard Barett for planning and carried it with me, supplemented by the excellent detailed route instructions provided by the Hebridean Tourist authority: https://www.visitouterhebrides.co.uk/see-and-do/activities/hebridean-way/walking-hebridean-way

Getting to the start point on Vatersay took me a couple of days - the train up to Edinburgh, then onto Glasgow and Oban, then 5 hours on a pretty rough ferry crossing to Barra. A pleasant evening at a B&B in Barra, which also gave the opportunity to stock up on food and hear local traditional musicians the Vatersay Boys. I did the run unsupported and carried all my gear in a 15L backpack, but I had pre-booked hostels or B&Bs for each night.

Note that the distances given here reflect what I measured on my GPS. In some cases, these are more than the official distance given on the Hebridean Way website, either because I got lost (which happened several times), or because I took a detour to a shop, place to eat, or place to stay overnight. 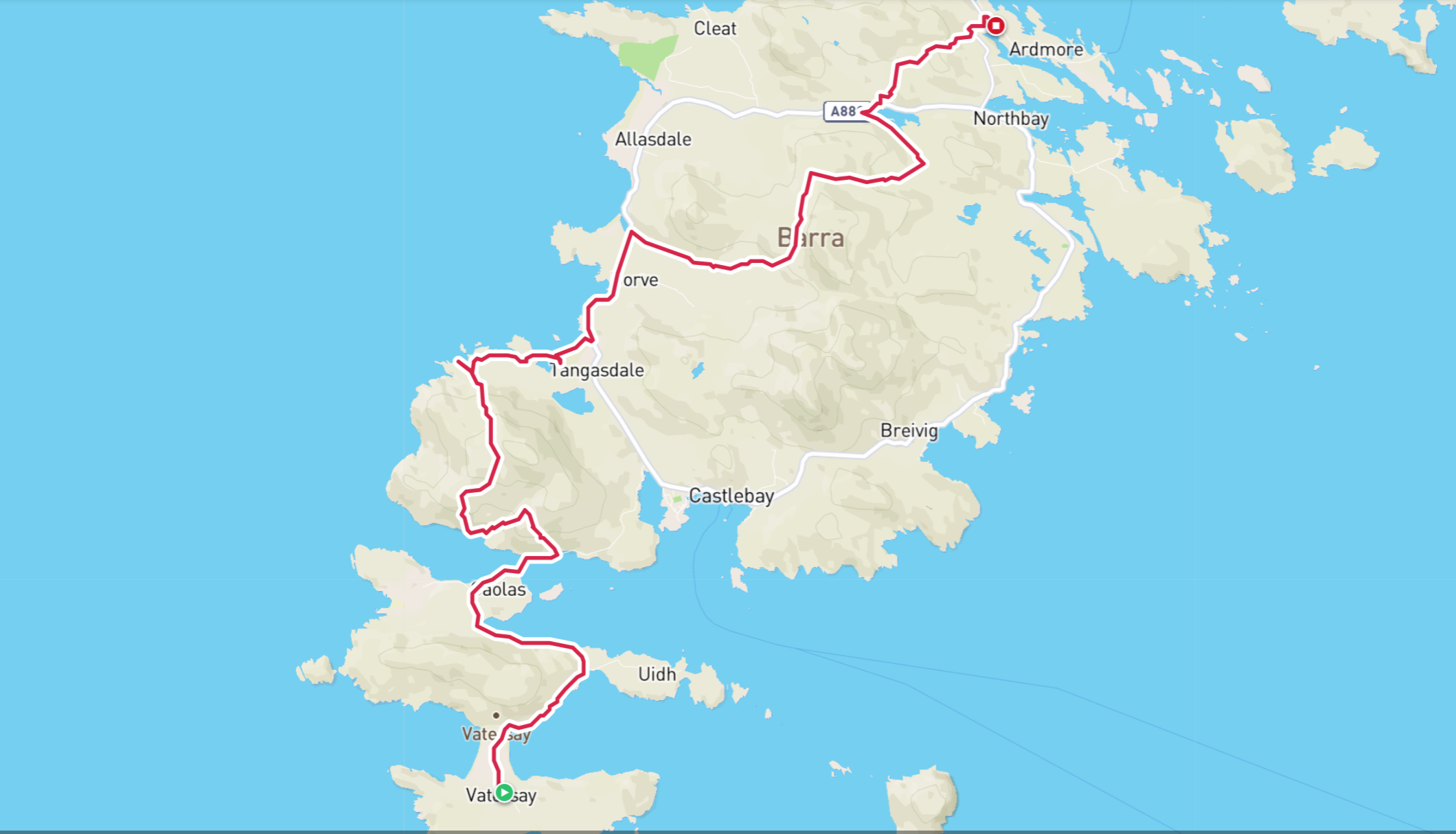 I was one of two passengers on the bus over to the first island of Vatersay and was dropped off in the village. The official start point is a little north of the village, near the Vatersay Hall Cafe. As this doesn’t open until late morning, I guess it’s used by locals rather than tourists. The Hebridean Way Cycle Route also starts here and I did see a few cyclists setting out. The cycle route obviously is on-road, while the walking (or in my case, running) route is off-road wherever possible. The cycle route seems to be pretty popular, and certainly the two ferry journeys were predominantly filled with cyclists.

The run across Vatersay is mostly along the island’s road and is fairly straightforward, all the way to the causeway back to Barra. After crossing the causeway, you turn left, up a reasonably steep hill. The route across Barra takes a fairly hilly (and boggy) line along the west of the island and I did manage to lose the way fairly quickly. In some places, the route is marked by poles, but these can be quite difficult to spot when visibility is poor, as it often is. Only 25k which is my shortest day.

The weather led to quite a lot of ferry cancellations, but fortunately, my ferry from Barra to Eriskay the next day was OK.

Pictures from Vatersay are here. ›

Pictures from Barra are here. › 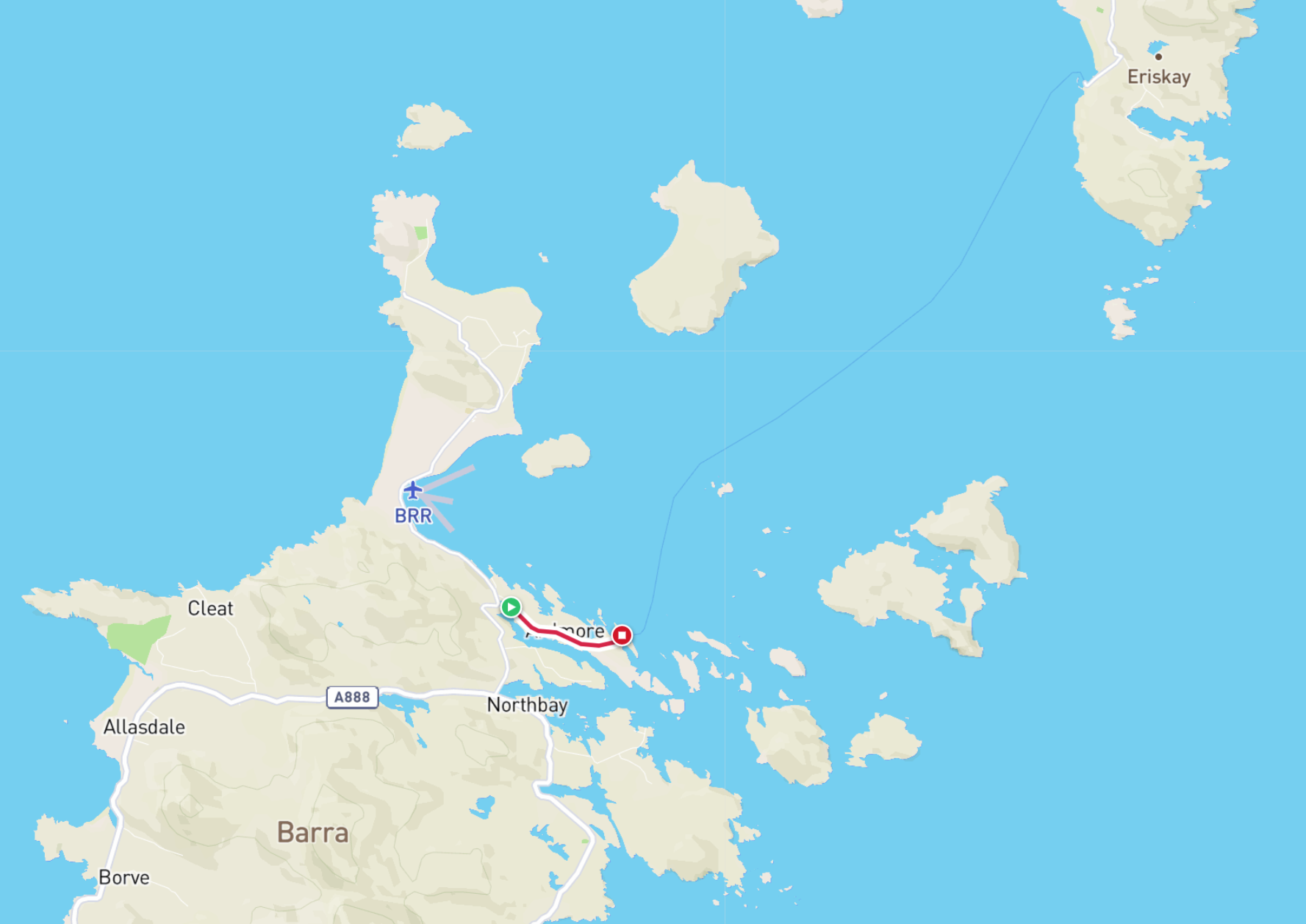 One of the nicer days of the whole trek. It began with a short run to the ferry terminal. 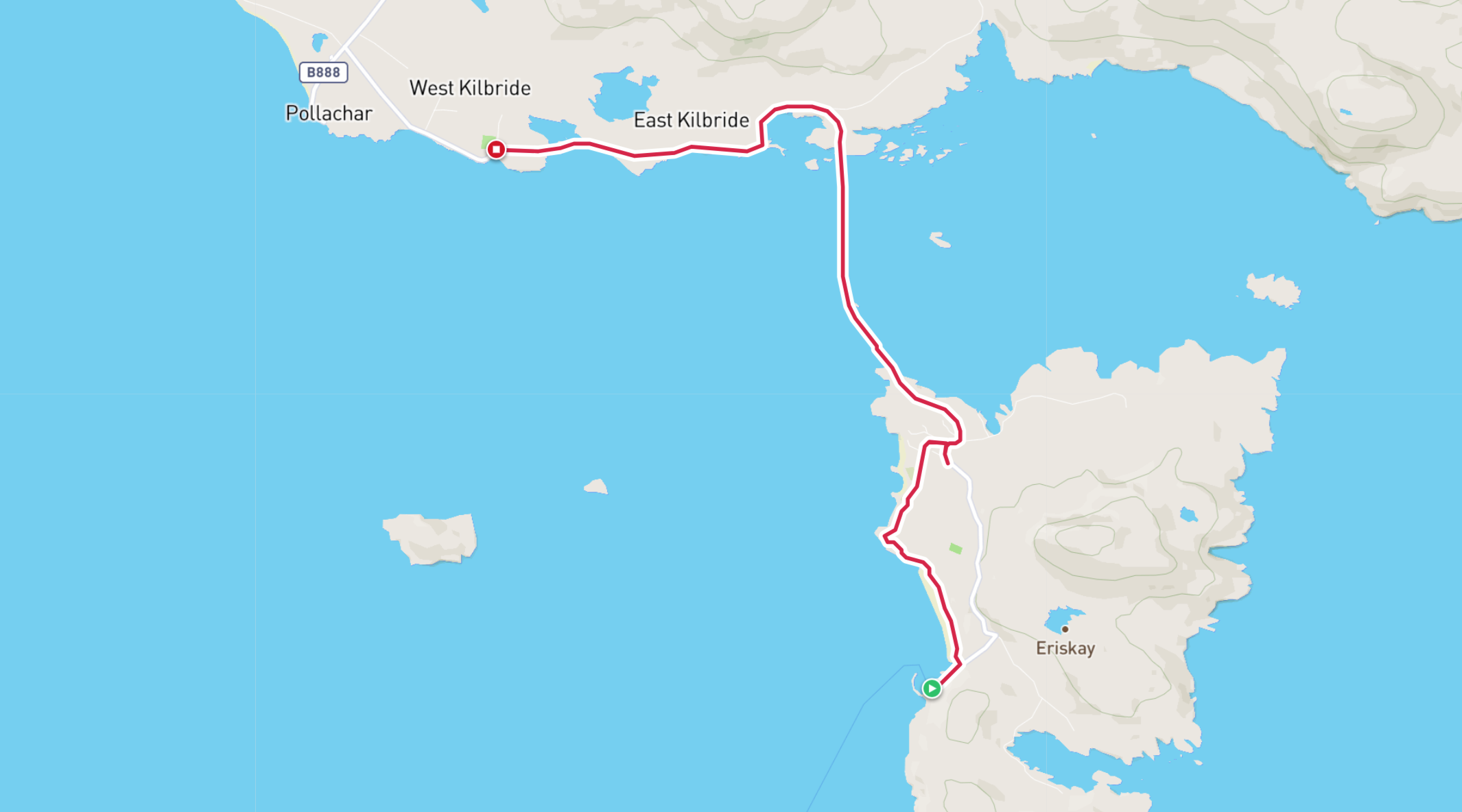 A brief, but interesting run across Eriskay, then over the causeway to South Uist. Stopped for lunch (and stopped my watch) at the very nice Kilbride cafe, which turned out to be my last hot meal for a couple of days. 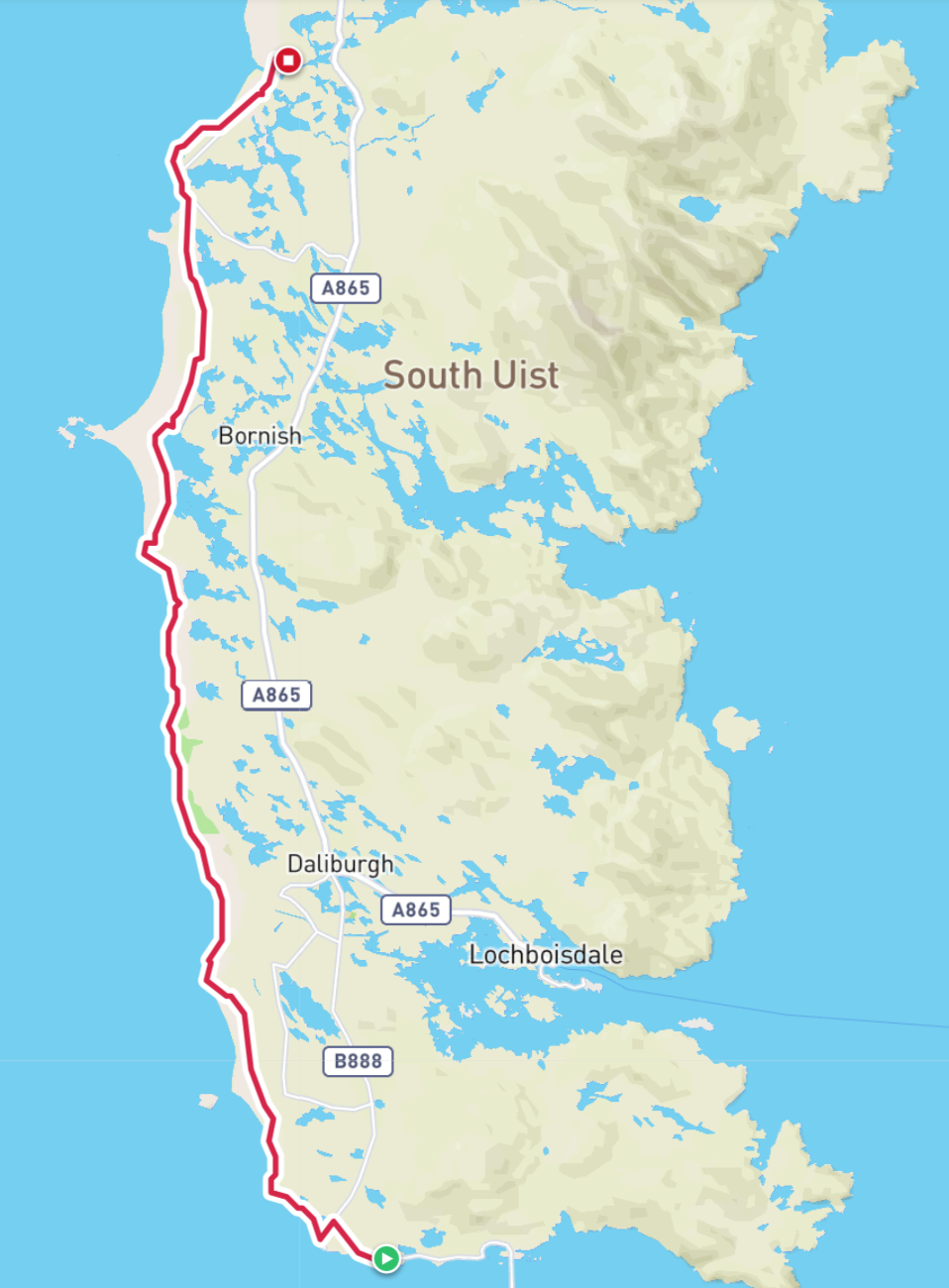 Really nice stretch up the west coast of South Uist, although very isolated, as I saw no-one (and also no phone signal). Stayed in the lovely Gatliff Howmore hostel, with some interesting company, including a man taking an otter census on South Uist, a mother and daughter travelling round with a camper van, a Spanish lady who was walking part of the trail and an Australian man who was also walking part of the trail.

Pictures from Eriskay are here. ›

Pictures from South Uist are here. › 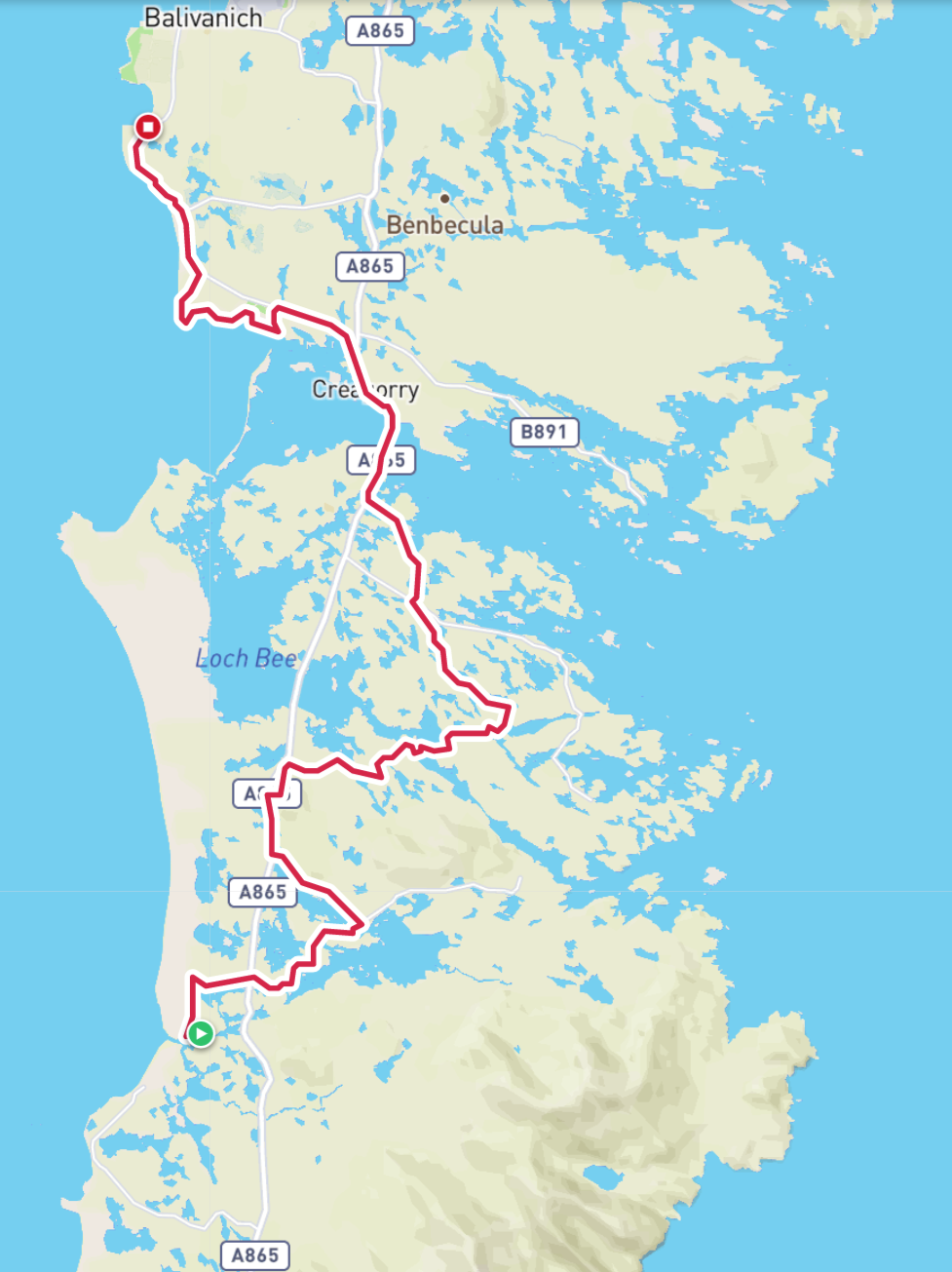 Quite a bit of pathless blanket bog and calf deep mud or water, so slow going at times. No rain until after I’d finished and some beautiful views of heather, lochs and mountains and several miles of running along white sandy beach. My GPS watch ran out of battery a couple of miles short of Balivanich.

Pictures from Benbecula are here. › 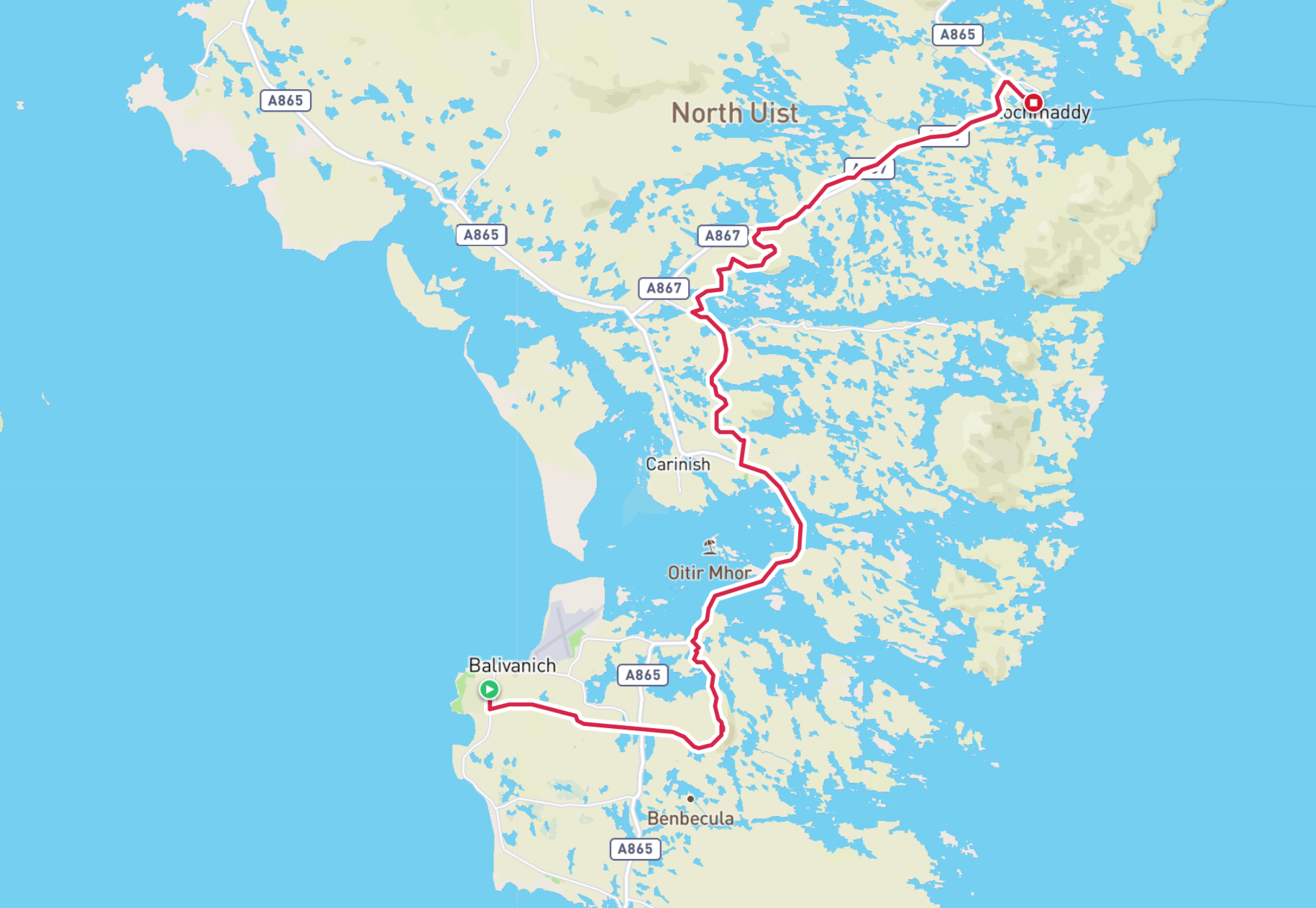 Three islands today, Benbecula, Grimsay and North Uist. A lot of tedious running along the A road (only way to take the causeway between islands) and a lot of what was in between was very boggy.

However, first part of the day was the view from the top of Ruabhal, which is astonishing. Only 120m high, but it gives a view over dozens of islands and hundreds of lochs, a real 360 degree panorama of the Hebrides, with a rainbow too. Definitely a highlight of the run.

North Uist also had a lot of offer, including a stone circle, megalithic standing stones and a big chambered cairn. Second oddest thing was a statue of Hercules, a bear who became popular in wrestling in the 1970s. He became a tabloid story for a couple of weeks in 1981 when he escaped in North Uist while filming an ad for tissues. He was recaptured due to his preference for cooked food over the raw fish he was catching and his new fame won him a role in a Bond film. He died in 2001 and is buried next to his statue. Oddest thing was a road sign that read “Quiet”. 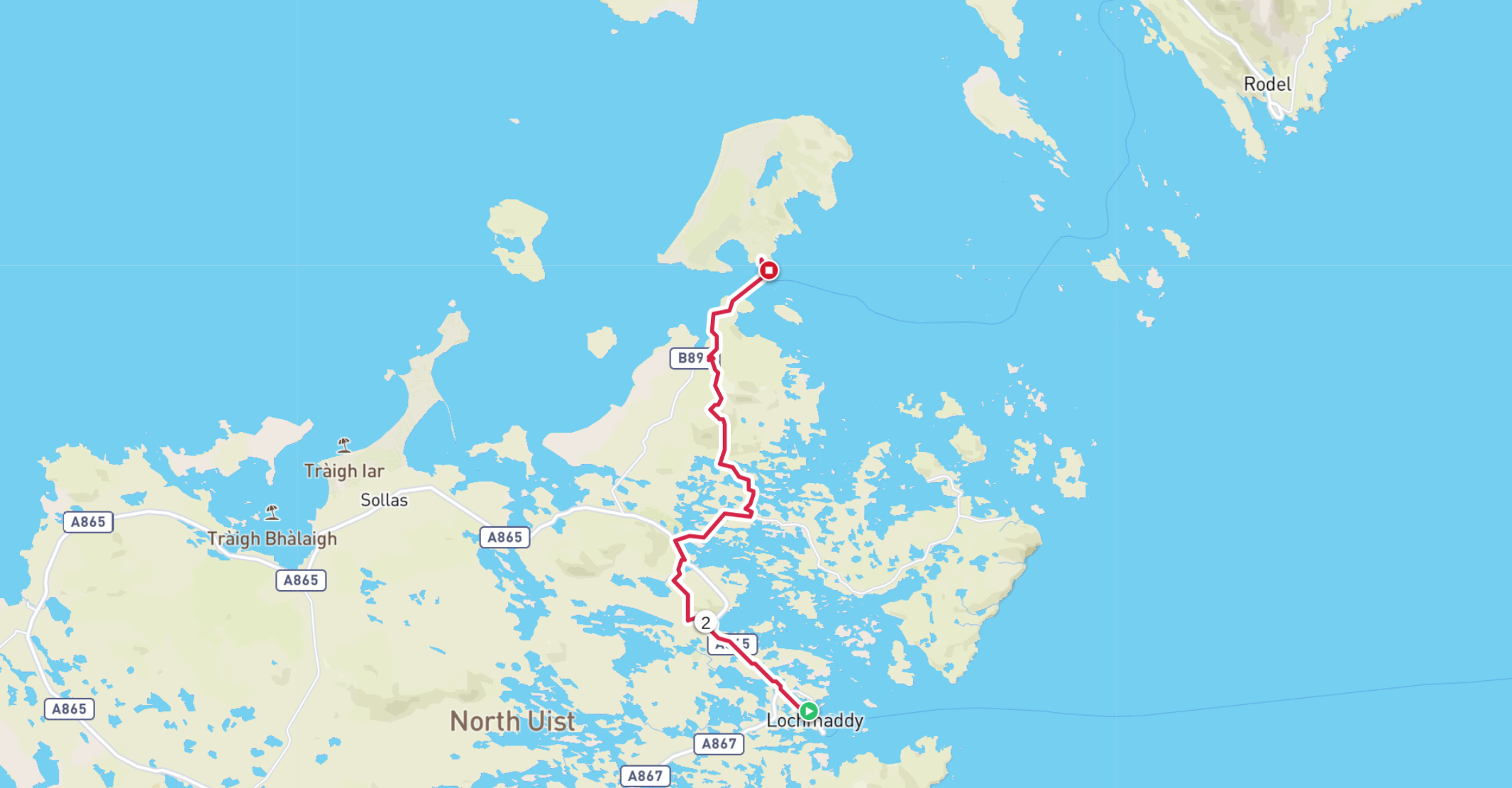 Crossed North Uist with really good weather, sunny and no wind. First appearance of any midges, but never needed the midge net.

Amazing views from Bein Mhor on North Uist, then over the causeway with a brief foray into Berneray, from where I caught the ferry to Harris. 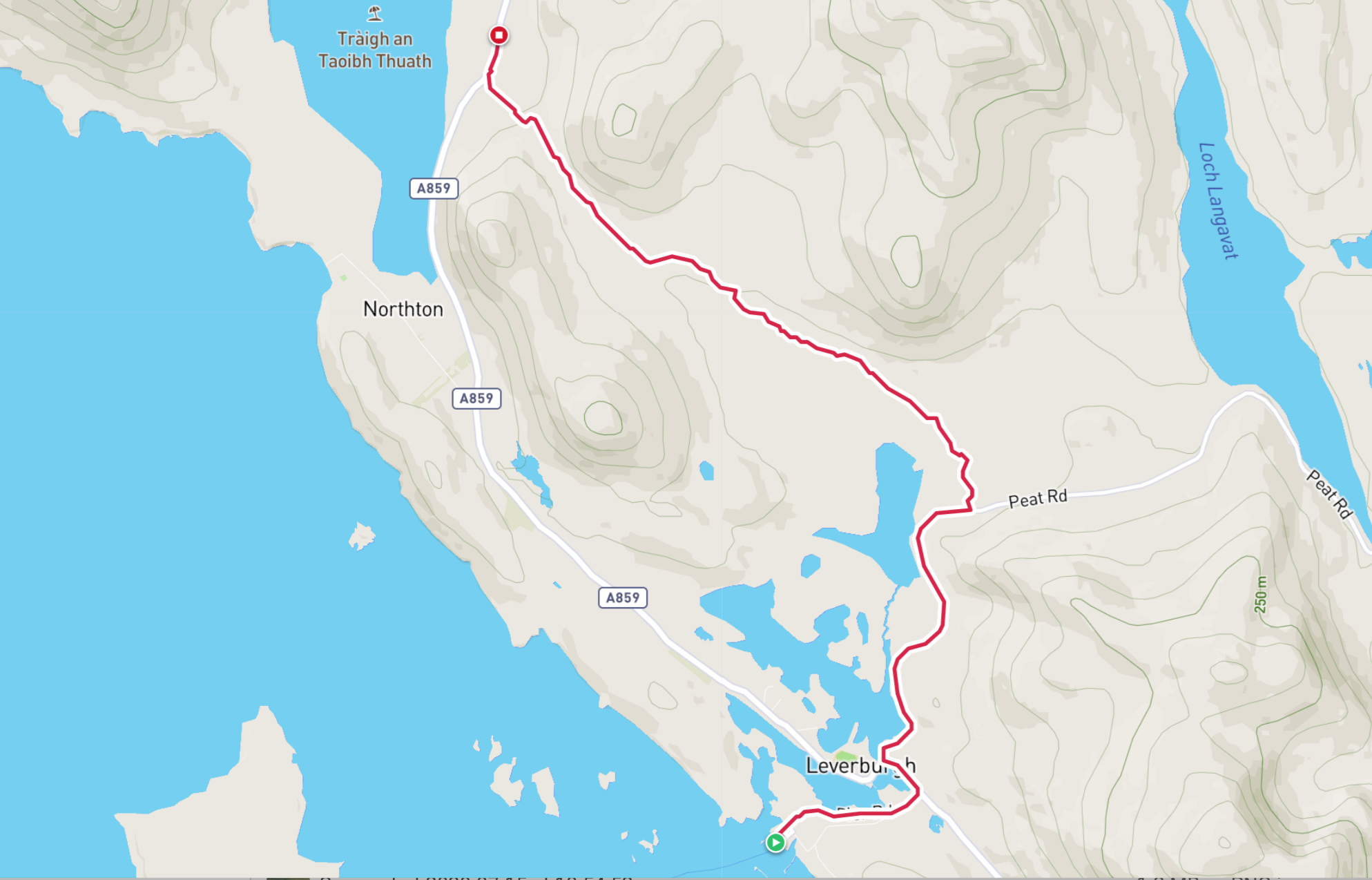 Lots of cyclists on the ferry to Harris. Then the rest of the afternoon spent running over the South Harris hills and more amazing views as I came over the hill towards sgarista beach.

Pictures from Berneray are here. ›

Bit of a slog today, raining all day and poor visibility, so not much in terms of views, and it felt quite unsafe at times. The path over the hills between sgarasta and seilebost was particularly poorly marked, even by the low standards of this route. Couple of nice EU funded footbridges over rivers miles from any habitation, but no visible path to or from the bridges and marker posts so occasional as to be little help. In hindsight, it would have been better to have just run along the road and not even tried to follow the “path”. Just short of 26 miles done in a bit over five hours, not really a day for hanging about.

Pictures from Harris are here. › 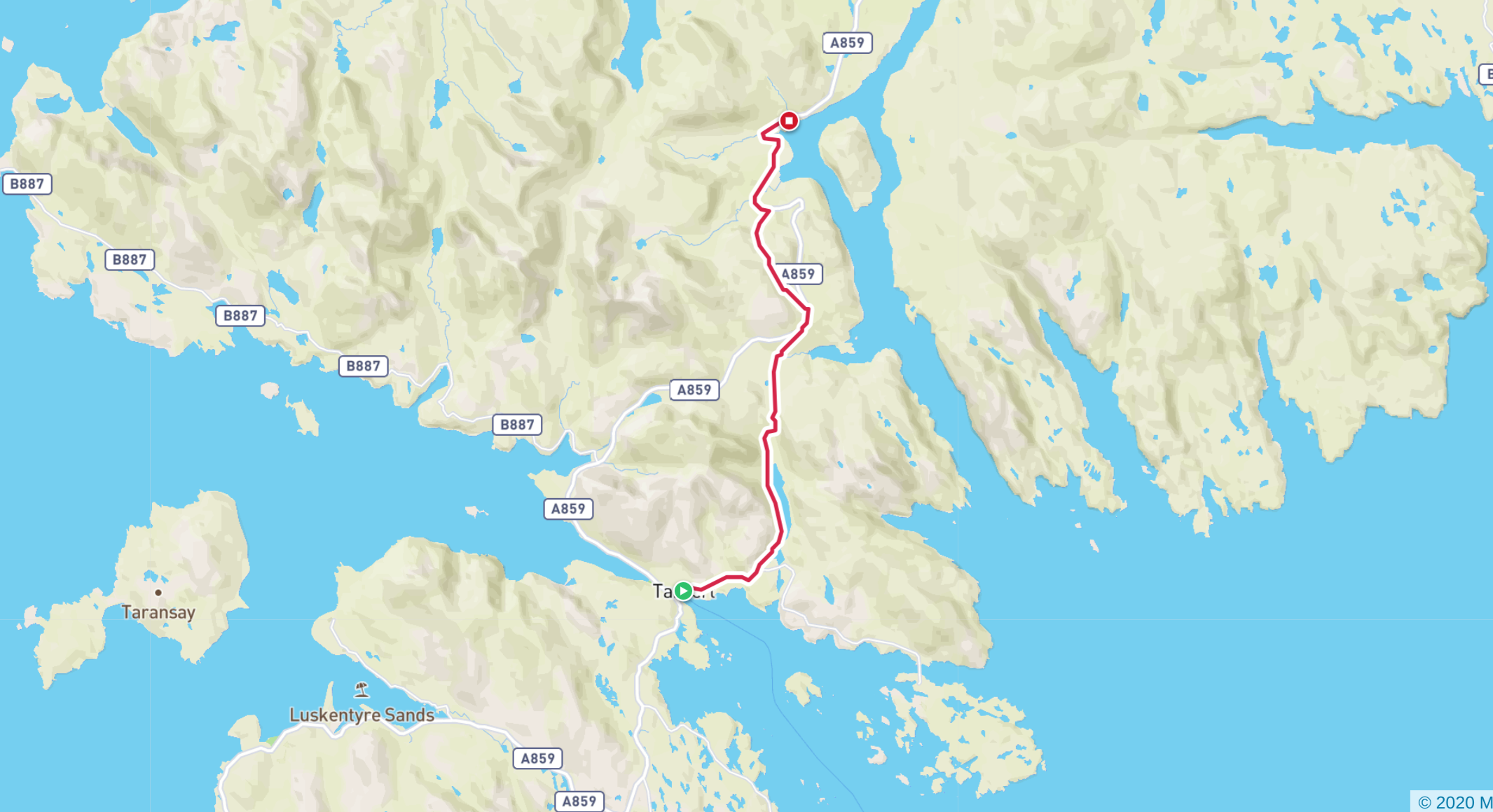 Pretty enjoyable day today. Light rain for the first couple of hours, and I had 3 layers on for the first time, but it was fine after that. Powerful rivers, waterfalls and lots of lochs in the morning, with a good rocky path and great views of the north Harris hills. Stopped for lunch at the Lewis/Harris border, where there is a van selling freshly caught fish (and chips, and a few other things). 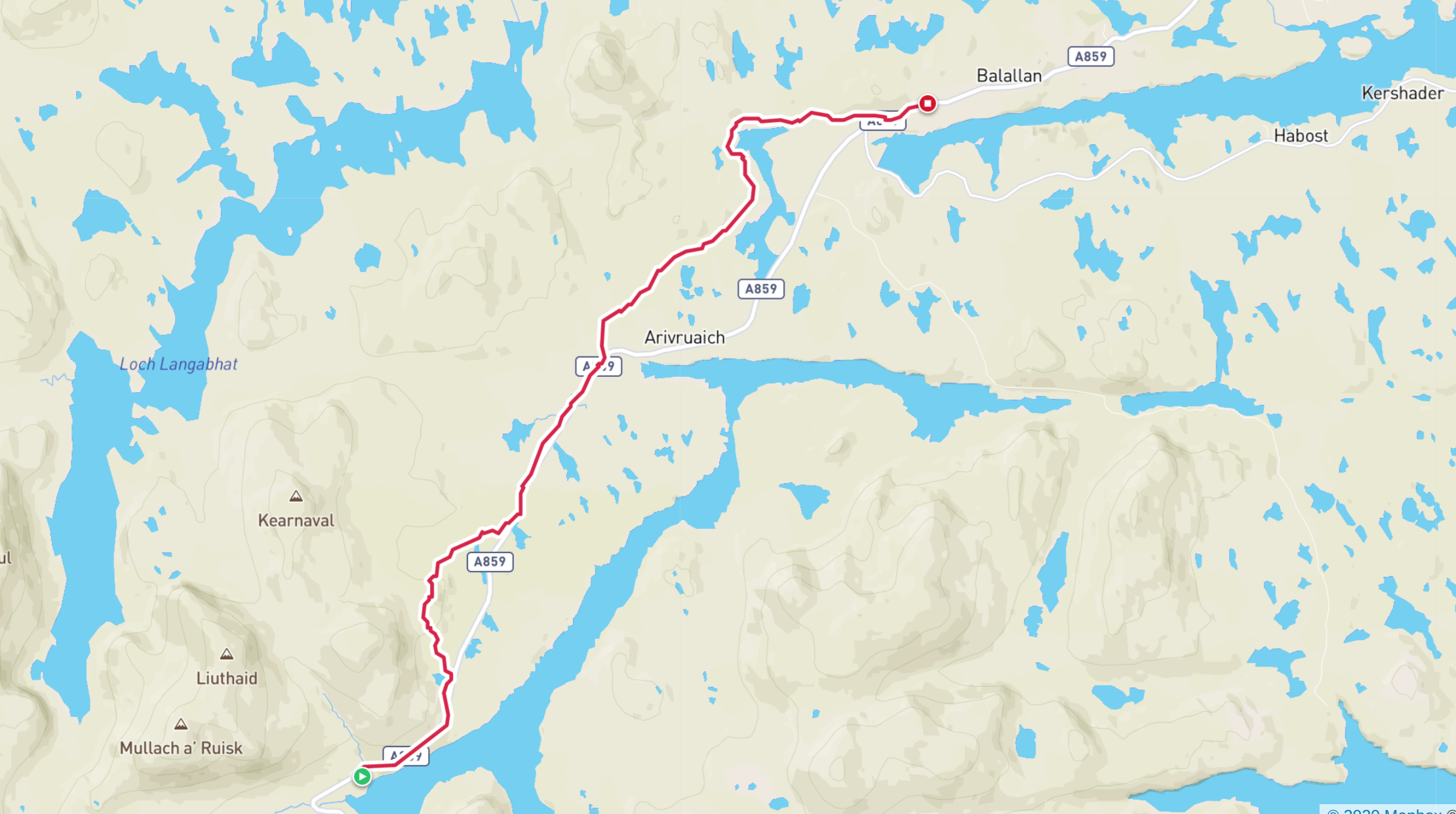 Short section along the main road and then another good path into the Lewis hills, even an ascent of 100m of so giving panoramic views over lochs studded with islands. A section of turf path came to an abrupt halt where it had been washed away. Instead there was a fast flowing stream about thigh deep and too wide to jump over. Had to pick my way through the bog upstream to a narrow spot and leap over and then make my way back to the boggy path. 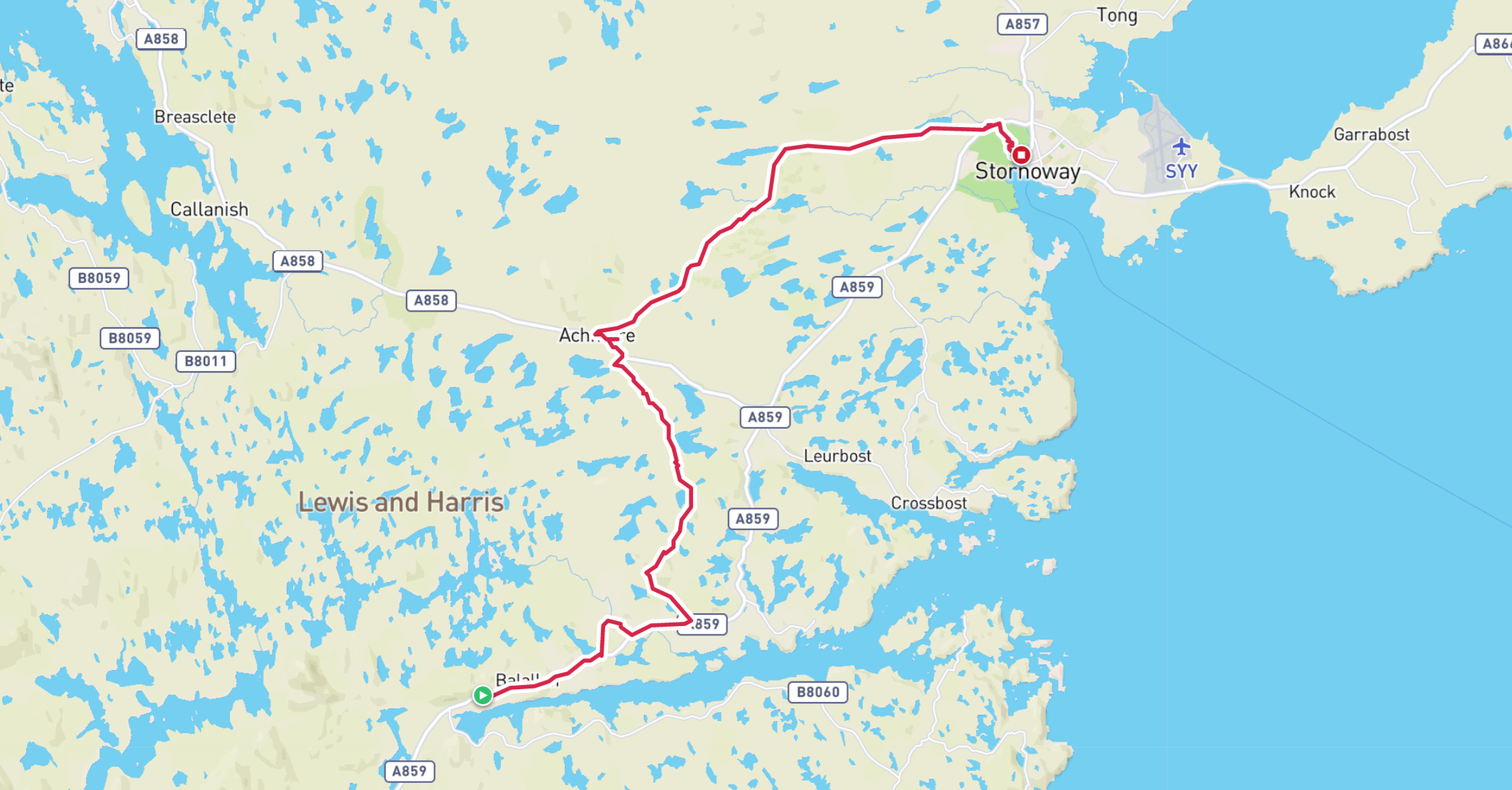 A good day of running today, 20 miles rather than the advertised 17, quite a lot of it on single track road, the rest of it on a decent raised turf path through the Lewis peat land. Interesting environment, lots of birds - saw ravens, grouse and a golden plover. Panoramic views over the hills and an unexpected short detour to a stone circle.

The endpoint of the trail is a little underwhelming, a marker next to the wheelie bins in a café car park. Fifteen minutes after finishing, the heavens opened and the windspeed went up to around 40mph, so I was very glad of the chance to have a coffee and sandwich.

Pictures from Lewis are here. ›

Overall, it was a really enjoyable and memorable experience. Ten different islands means a pretty diverse range of terrain and scenery, quite a few places with stunning 360 degree views that my phone camera really hasn’t done justice to. Even those places (like the Lewis peatlands) that are pretty bleak were interesting. As a keen observer of nature, it’s strange to be in a place in Britain where you don’t recognise the plants or birds. Lots of interesting history and archaeology on the way too.

The logistics of doing this route as a run (or walk) were interesting and all worked out perfectly as planned. I was running unsupported, but didn’t want to carry a tent. Accommodation along some parts of the route is pretty scarce and needs to be booked ahead of time (in season, at least, and you probably would not want to attempt this route in winter anyway.) Shops and places to get food & drink are also in short supply. I went 3 days without a hot meal. Ideally, it would be nice to have had some slack in the plan. The weather in the Hebrides is pretty variable and although I had rain & strong winds, it was never enough to stop me running. If it had been, I would have simply had to take the bus to the next stage. Likewise, there were ferry cancellations (both due to the wind/ visibility and mechanical problems) which could have scuppered things, but didn’t. I should also say, no problems with midges, clegs, or ticks (which I was a little concerned about in advance.)

In terms of running, there is a wide range of surfaces - A roads, minor roads, sandy beach, heather moorland, gravel tracks, pathless bog, standing water and sections of path constructed by cutting turf and piling it above the resulting channel. Be prepared to watch your footing carefully and to have to walk sections, or to stop to consult maps/ GPS/ compass, as waymarking is not great in some places. It’s not a route to attempt at any great speed.

Overall, though, it’s a beautiful place to spend time and I really appreciate the difficulty the authorities have had in creating a path across such difficult terrain and just how much effort and thought has gone into it. In 7 days of running, I saw only one other person on the off-road sections. This is not the West Highland Way or other popular long-distance routes. It’s empty and there’s little infrastructure. I do hope more people will be tempted to walk or run the path.