The Tiree Ultramarathon is a 35 mile lap of Tiree, in the Southern Hebrides.Tiree is relatively flat, hence the soubriquet ‘the land below the waves’ although it doesn’t seem quite as watery as say benbecula.

I travelled out to Tiree on a very early ferry (check in a little after 5am), which required an overnight stay in Oban. A pleasant ferry crossing, filled with other runners. The island’s ranger very efficiently handed out camping information as we arrived. I ended up camping on the island for four nights, as both ferry space and accommodation are in short supply and there were a lot of runners doing the race. Although wild camping is legal in Scotland, Tiree prefers people not to damage the machair environment and provides facilities for wild camping on a dozen or so crofts for a small fee, albeit with no facilities of any kind.

Tiree is quite a typical Hebridean Island in many ways, but has its own character. It has that mix of crofting and tourism that the other islands have, and the usual artists and recluses. A similar mix of quite rough and ready cottages with some fancy architect designed new builds with lots of glass and wood. None of the red corrugated iron roofs if Lewis, or the brutalist sixties East European style houses that North Uist has in places.

I’d been warned by someone who visited in the 1970s that all I could expect was cowpats and jellyfish. However the beaches are uniformly beautiful, and the island’s low hills provide excellent views across the sea to other islands.

Tiree lacks the amazing must-see places that say Skye and Harris have, but has its own tourist niches. Plenty of people there for kite surfing and windsurfing, although I’m not sure about the Hawaii of the North tag. Lots of birdwatching types too. I recognised dunlins and plovers but lots more I’m sure. There is a big music festival and a film festival too. I had the sense everywhere that locals were proud of the island and pleased to welcome tourists.

On to the actual running. Will, of Tiree Fitness, who does a fantastic job of organising the whole thing, puts on a weekend of events. This starts with an optional ‘ pop-up parkrun’ at 10am on Saturday, 5k along the beach. That means wet feet! Saturday afternoon is registration - race number, map, t-shirt and an opportunity to buy a hoodie. 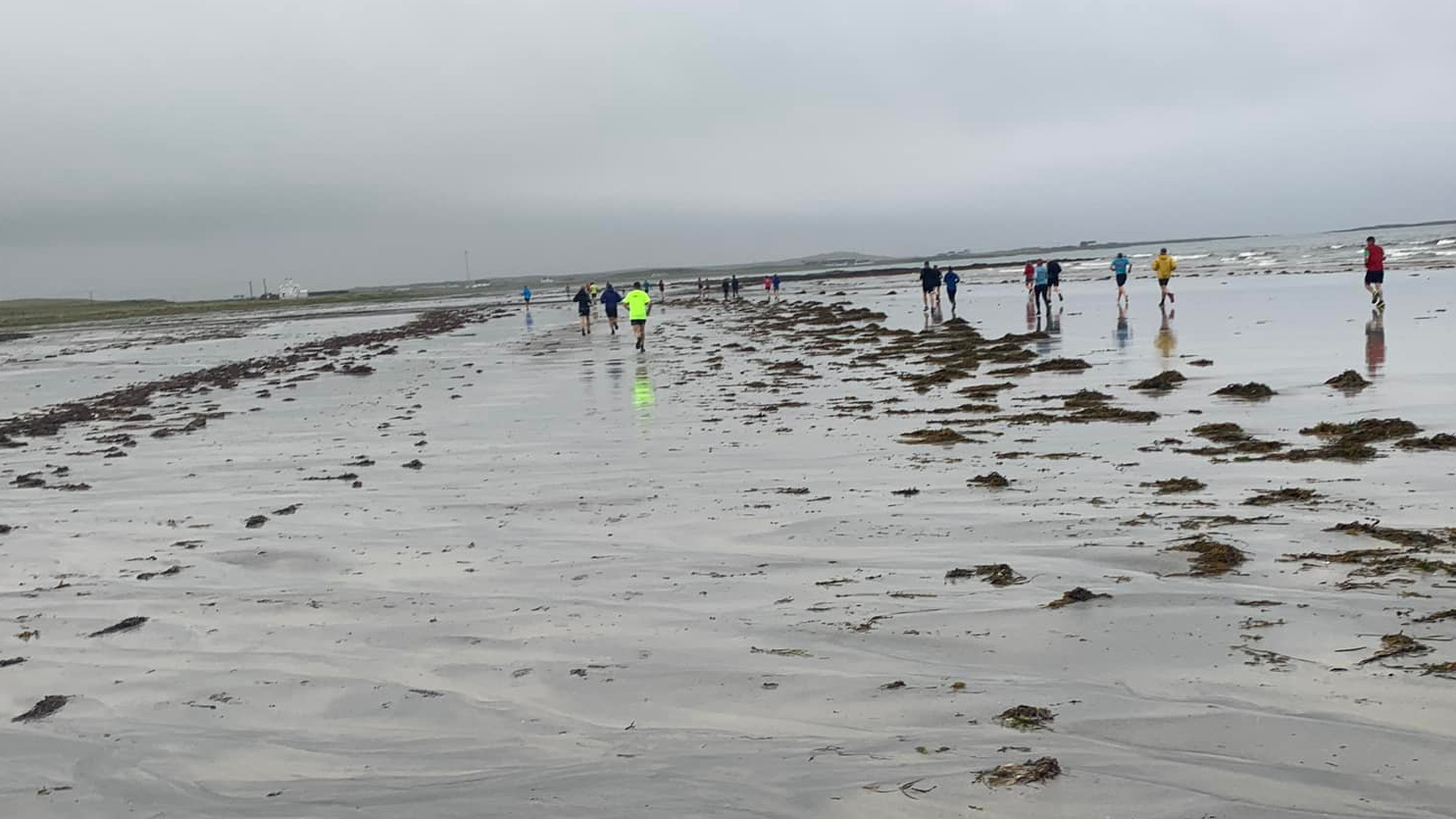 The ultra starts at 8am on Sunday and there is a free ceilidh that evening, although not everyone was in a state to dance.

The Scottish weather played its full part in the actual Ultra. We had over 12cm of rain over the weekend, which made camping interesting. The BBC headline read ‘Sunshine isle drenched by month’s worth of rain’’. The wind was so strong at the start that it was impossible to hear the race briefing over the loudspeaker and even the piper was struggling. We set off into gale force winds and driving rain. I think a full day of that would have been very difficult. Only around half of the list of entries appear to have finished, and I suspect the weather was responsible for many of the DNS/ DNF.

Piper at the start. 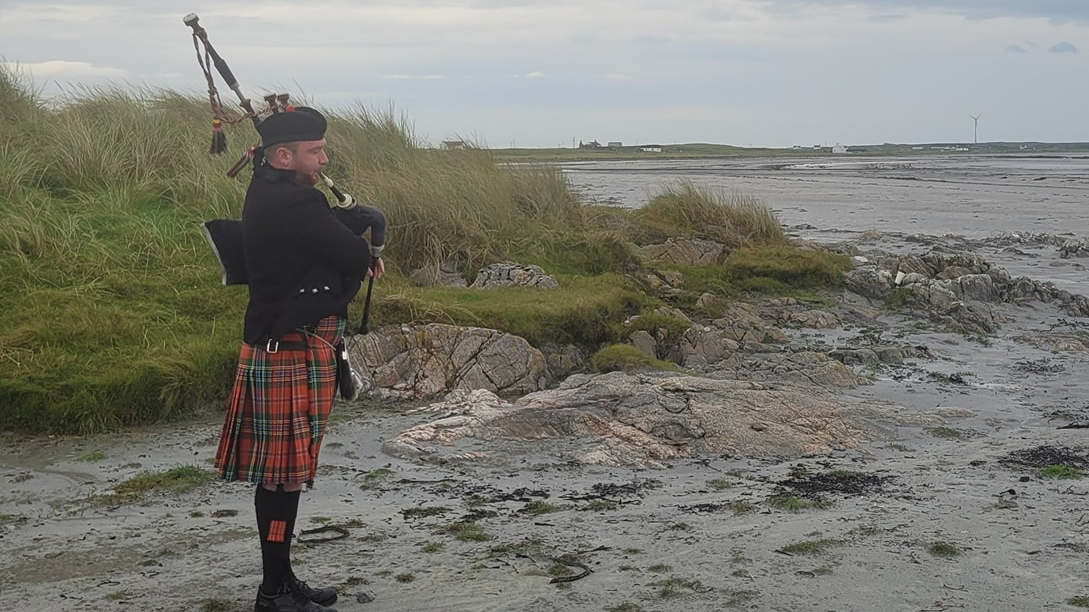 After a couple of hours, though, the sun appeared, it got warm, and some people have been posting quite funny pictures of tan lines on Facebook.

The 35 mile course sticks to the edge of the island as much as possible. There are 14 beaches to run across, mostly silver sand, but some shingle sections. In many places there are small streams to wade through. Between the beaches, there are sections of slippery rocks to clamber over, heathery bog to pick your way through, some short steep hills, but also easier sections on grass and road. Not as flat as you might expect, but certainly not a hilly course. I did manage to mis-step and go knee deep in muddy bog at one point.

Not just sandy beaches, shingle too. 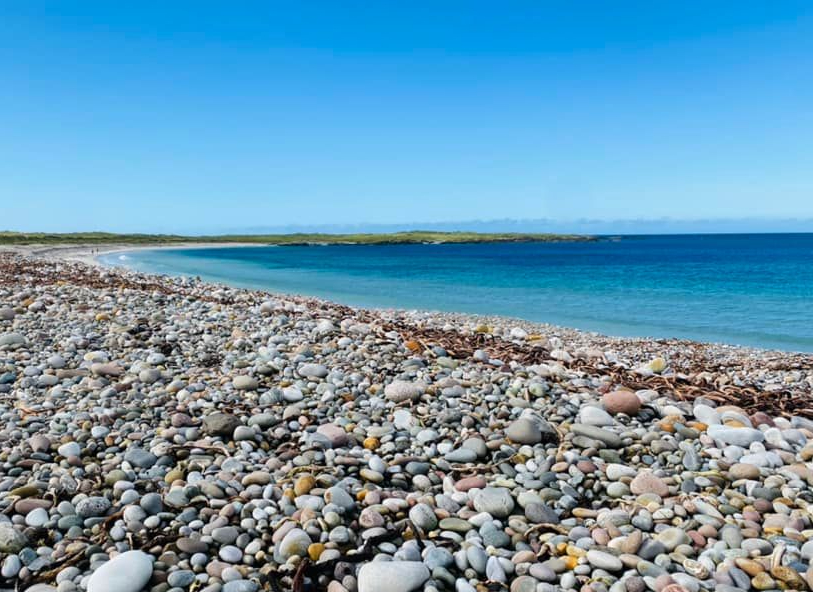 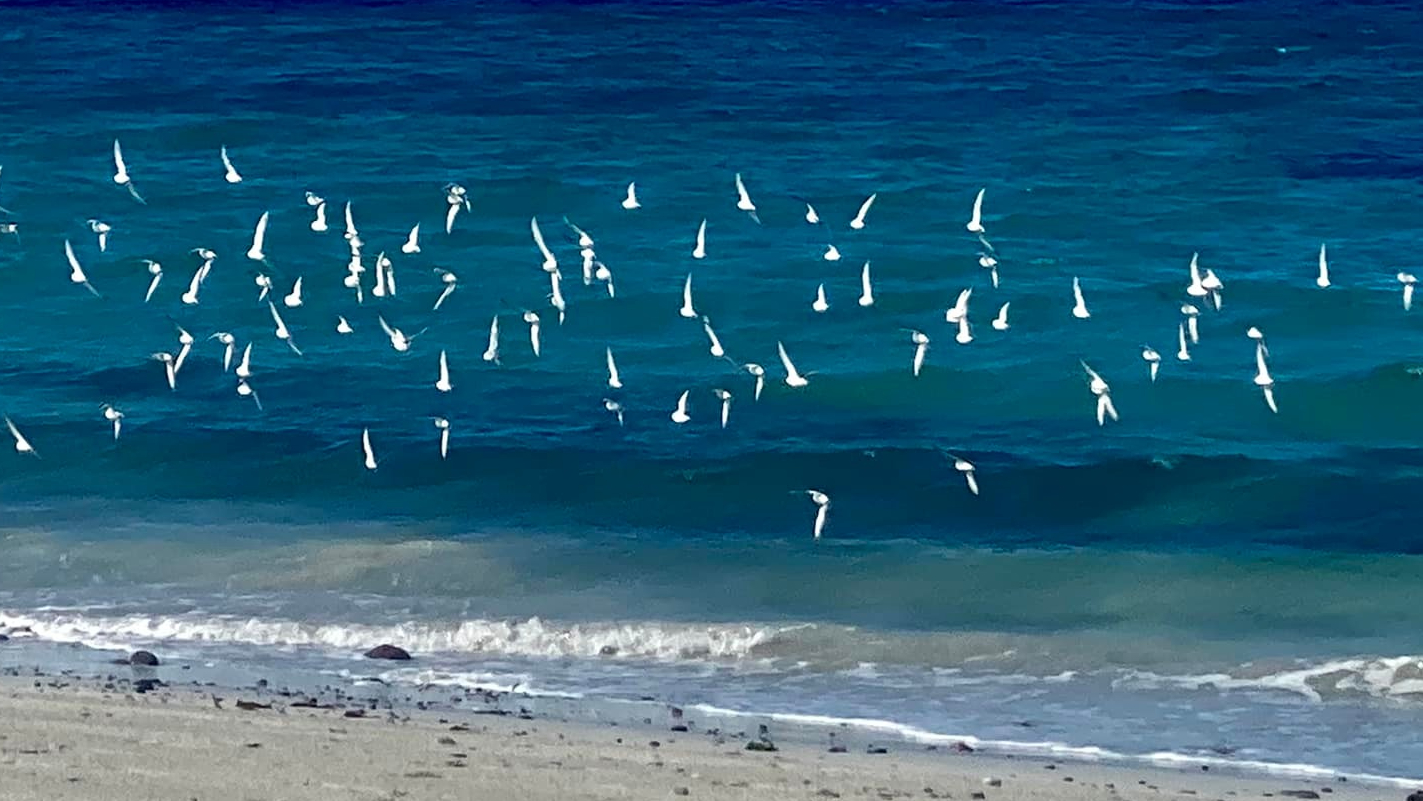 One of the few hills on the course (and not particularly high) - “I love hills!” 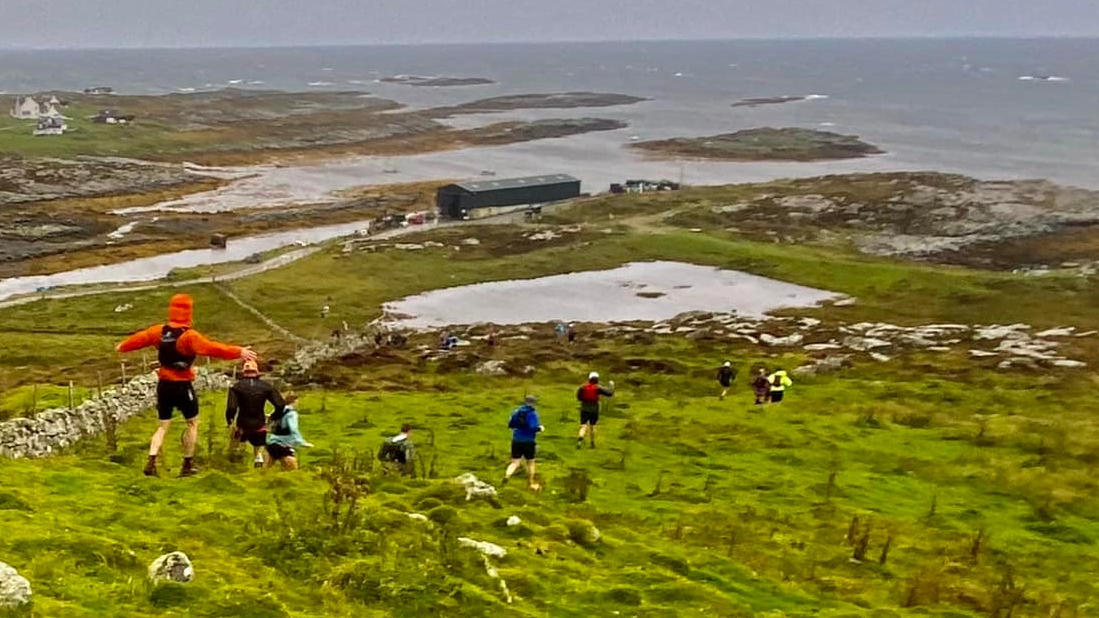 Streams to wade through. 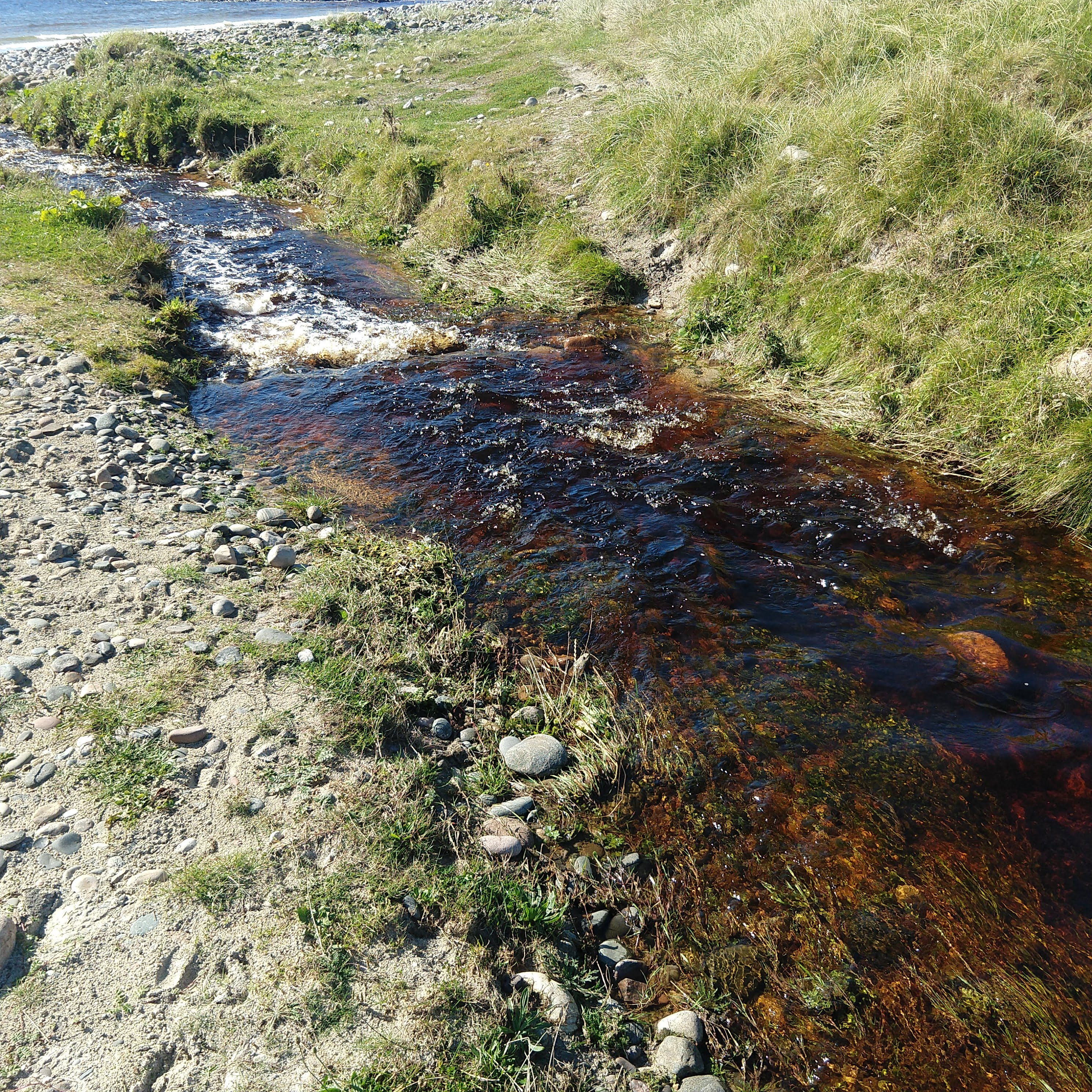 Everywhere was looking beautiful in the sun, of course, but some particular highlights for me were waiting for the flock of sheep that decided to cross the stream of runners, the seals watching us go by, the various standing stones and archaeological sites we passed and the chap playing guitar about 40km in - he must have been out for hours.

Sheep on the course 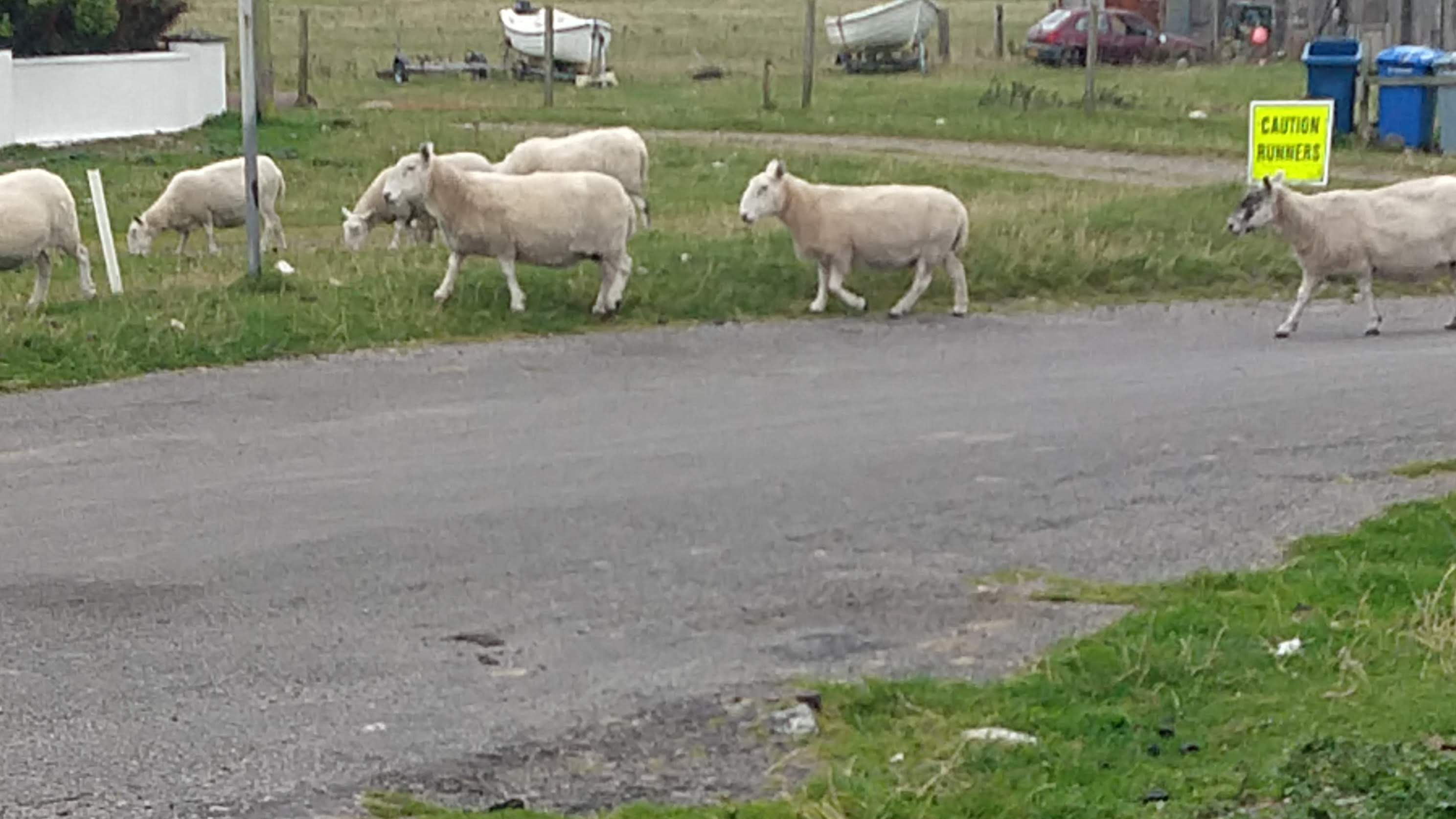 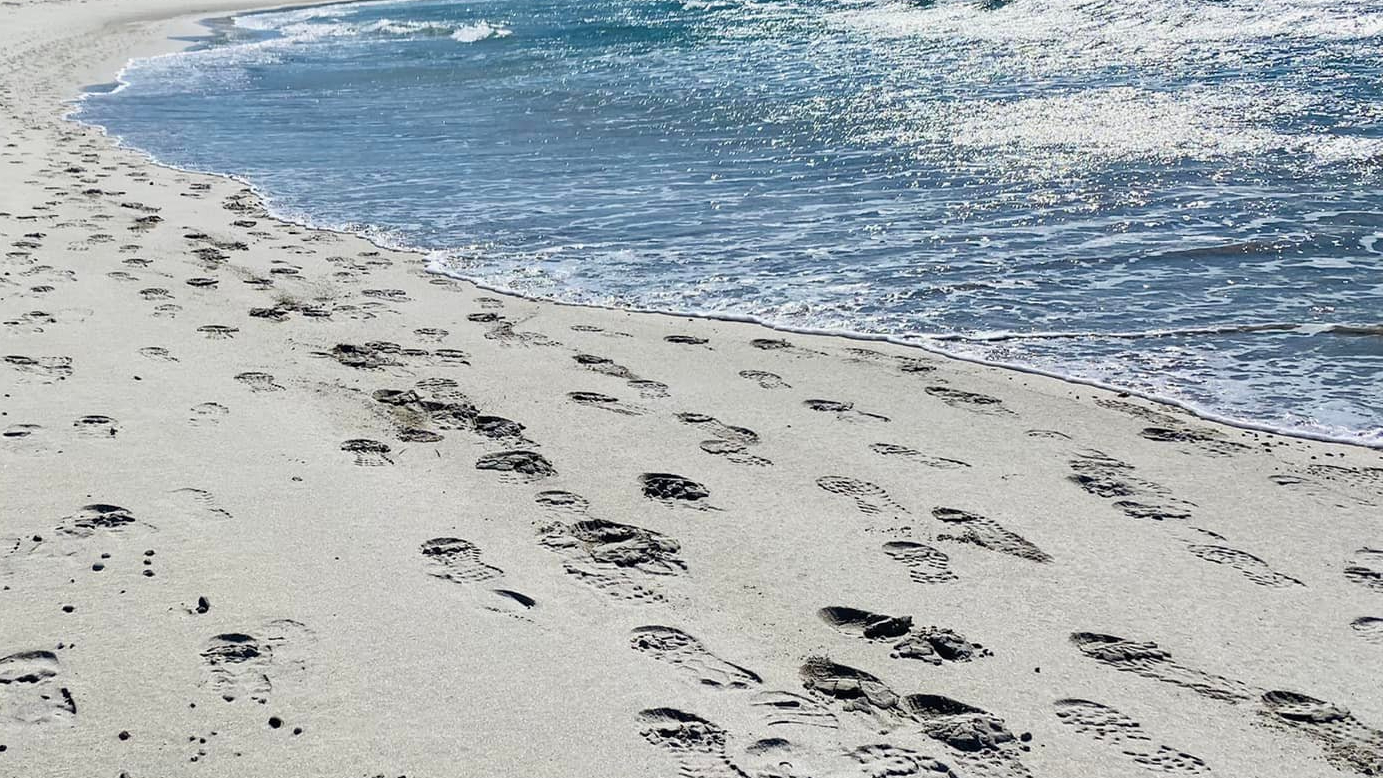 Signage was excellent - never any danger of getting lost. 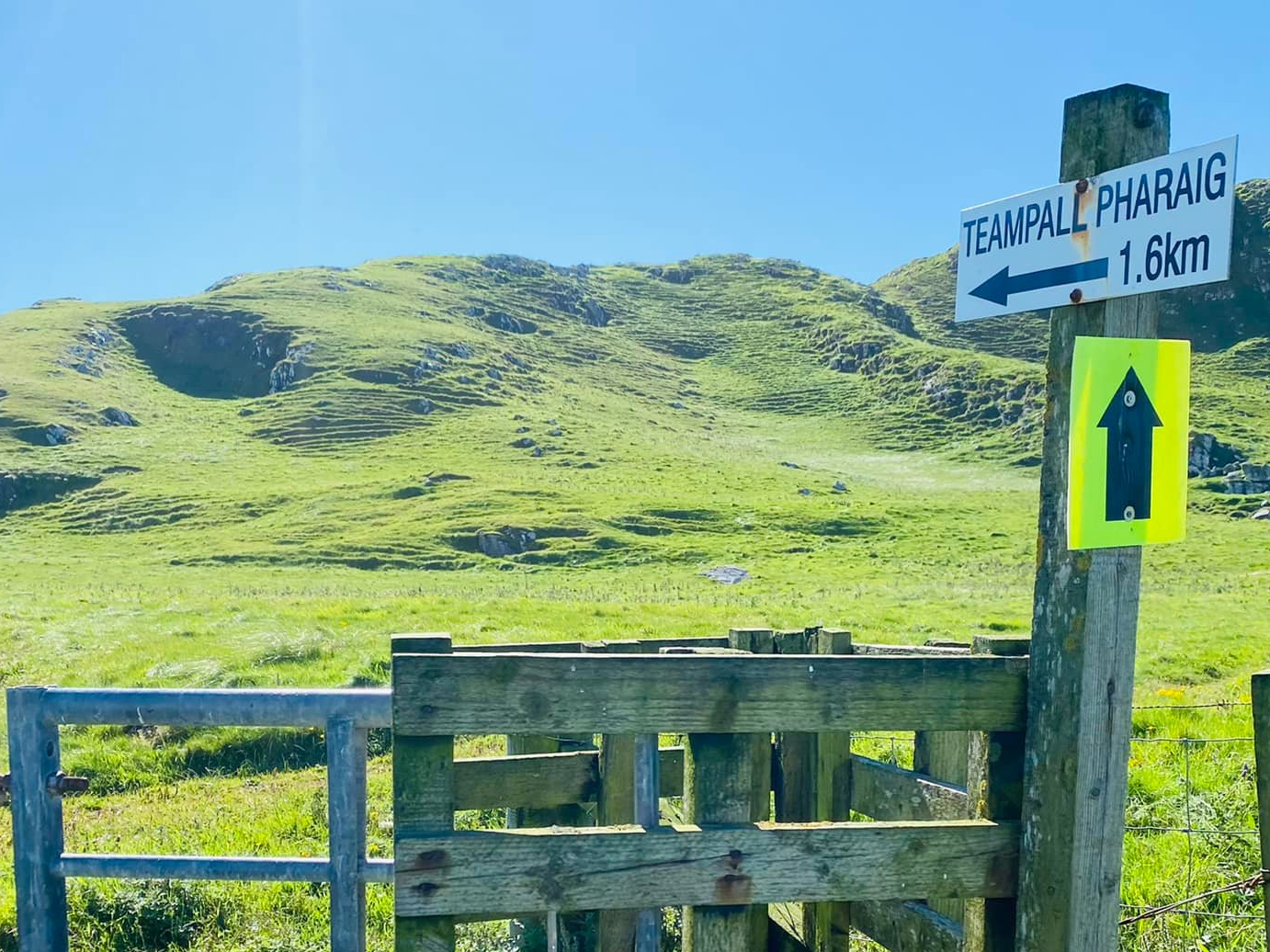 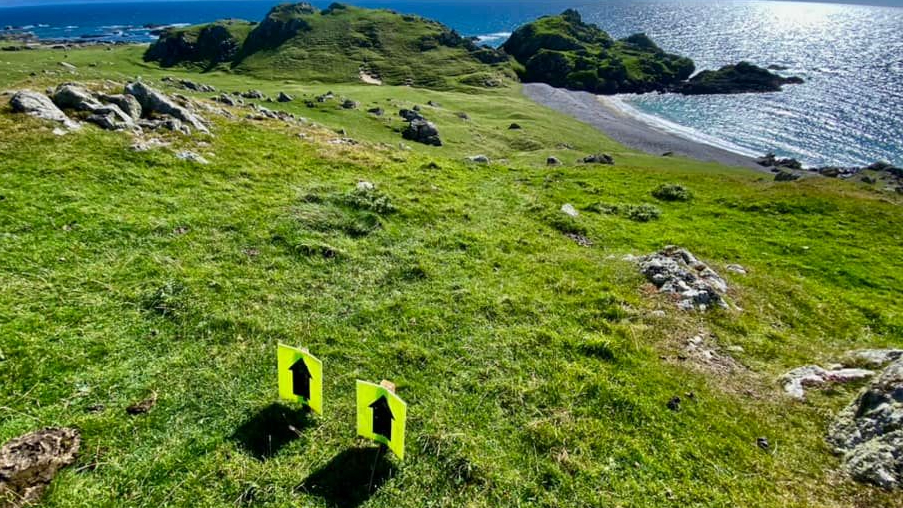